Greg has the scoop, and the hot picture! 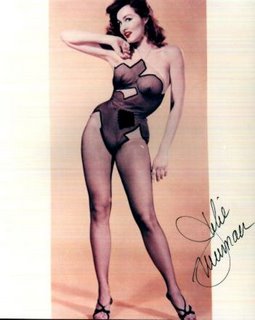 Here's Julie in her "Stupefyin' Jones" get-up. I should mention that when Encores! did Li'l Abner in New York in 1998, Ms. Newmar was once again "Stupefyin'," 42 years after originating the part on Broadway. She was also in the original cast of Silk Stockings, another favorite Moon show...

UPDATED: More from Greg that I forgot to include: It wasn't just Broadway musicals for Catwoman. She was notably one of the seven brides in the movie Seven Brides for Seven Brothers (she was, need I even say, the tall one), although her name was still Julie Newmayer at the time, and her hair was brown.

And besides Catwoman, I loved her best as Rhoda the Robot in My Living Doll on CBS with Bob Cummings, although I categorically deny that I'm actually old enough to have watched it during its original run.

"Tell me I'm beautiful, it's nothing. Tell me I'm intellectual - I know it. Tell me I'm funny and it's the greatest compliment in the world anyone could give me." -- Julie Newmar.

[Ed note: My Living Doll? Rhoda the Robot. You got me on that one!]

Comments:
I've had a huge crush on Julie Newmar since I was a kid. I was too young to see My Living Doll in its first run, although I have seen bootlegs of the episodes that leaked out. The show aired '64-65 when I was, like, all of one year old.