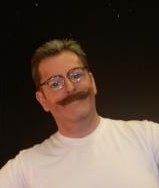 Can't say Russ isn't a good sport. Not only did he provide an actual photo of himself in the infamous Russtache, he offers the following response:

For everyone's information, this was not the first appearance of the so-called "Russtache" on the 42nd Street Moon stage. It was last seen on my character of Sandow the Great, during the run of "Minnie's Boys" and was wildly popular during it's run. Attached is a photo of the "Russtache" in action, backstage at the Eureka.

As for upsetting others in the cast by making a bold character choice, my feelings can best be summed up by quoting from the libretto of our show: "Despair cuts through me like a knife, what is the meaning of my life?"

OK, so I don't feel THAT bad, but I was aware enough of the strong reaction to the 'stache that I got rid of it by the next number! :)