First Golden Apple performance shot sends me off on an odd tangent! It sucks to be Alexandra Kaprielian as Helen,what with all this devoted attention from Jerry Van Carlos Gore as Paris.

I'm doing my best to not objectify the poor guy, but how often do you get to see a shot of a fully clothed woman with a half-naked guy? Usually it's more like the recent Vanity Fair cover featuring a clothed Tom Ford (who?) with supposed mega-stars, but definitely naked, Scarlett Johanson and Keira Knightly. You can take a peek here. (And yes, I know who Tom Ford is. My point is that you'd think the women would be the ones with the power, being movie stars and all, but who do you think looks powerful in that photo?)

This trend of scantily clad women isn't just a modern convention (despite hip-hop video taking it to the next level. Nope, it dates back pretty far: 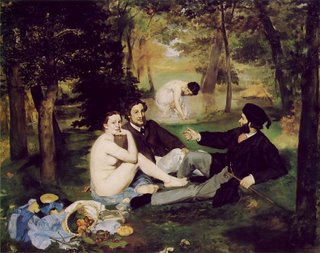 Comments:
Hey this is Alex and I just want to ask ... what? What did you mean?

I was being sarcastic about it sucking to be you...since you have this hot guy gazing adoringly at you while you sing :)

The rest of it is vaguely feminist ramblings about how usually women are in the position of being the half-naked ones.